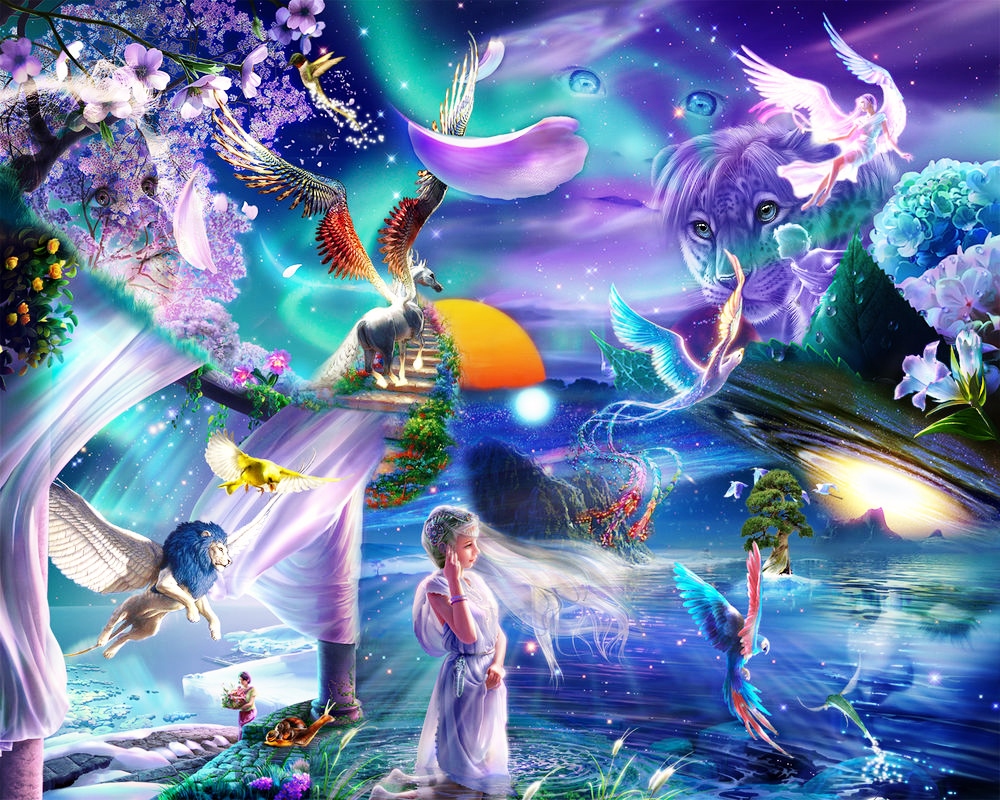 When the yogi retires in the spiritual eye he knows all matter, energy and gases are composed of thoughts. God could not separate himself into something else, so the only way he could make a differentiation with himself was through thoughts. Now what are thoughts? Are thoughts energy? No, thoughts are portions of consciousness. Therefore, you as an individual human being have become thirty thousand billion pieces of consciousness of which you have no control. God created this entire creation after himself as thoughts and then He created us. We have no reality except thoughts and we are floating in a beam of light.

Our senses deceive us because they tell just the most superficial properties of matter. The senses do not tell the truth and if they did you would see this planet as glaciers and rivers of electrons moving as a mass of light.

When you go to the movie theater and look at the beam of light is there anything real in that beam? Yet when you look at the screen you become involved in the emotion and you begin to cry or laugh and there is nothing in that light, right? It is the same thing with creation; you and I are floating, says the master and only God’s ideas are floating in a beam of light. It is incredible how we think we are so real when we are so hypnotized. When you see the hero die in a motion picture, he has not really been killed. It is the same with man acting out a role in the cosmic movie of life. The killer and the slain hero on the screen are just the electric shadows of two forms. The falcon of death and the villain on the movie screen are alike, they kill no one! Do not misinterpret this philosophy with false reasoning thinking we should kill all our enemies. The souls of your enemies are also immortal.

All motions of consciousness are on the screen of the mind and all of our mystifying and sweetened material entanglements keep us dreaming to make us forget our immortal consciousness. It does not matter how devastating our dreams are, the dreamer is never hurt by the circumstances of his dreams; he always finds himself safe after the dream experience. The human-dreamer may be scared to death with the experiences of his dream-life but as he is awakened in spirit he finds himself to be safe and sound. Worldly men have no idea of what the soul is or how it comes and goes into the physical body. Those who fear the cycles of life and death and what these experiences will hold, will have to hear this over and over until they get the point.

Unless man overcomes these fears repeat incarnation is in order until knowledge is gained on how to overcome them. Do not ever seek death; only a coward is afraid of learning life’s lessons. If spiritual development is not deeply implanted, the severe pain of illness or the nearness of death sparks great fear. Those who in despair have surrendered their faith in God and the memory of their immortal nature and die in terror, take with them into their next incarnation a depressing pattern of weakness and fear. The astral blueprint they have created will attract similar calamities to themselves. However, the hero even though he loses the death battle but departs with dignity, finds his way back to his oneness with Omnipresent spirit and at death drowsiness will overtake him into a state of peaceful slumber; when he awakens from his much needed sleep of death from all the hard trials of life, he finds himself aware of a new astral body and enjoys all of the beauties of the astral world encased in tissues of light forgetting the troubles of past earthly life.

We are not made of flesh and bone, we are made of energy. How? Tell me how can energy be sick? Do you know how? Suppose there is a projector here and a screen over there and the film is the picture of your body, so I put my finger in front of the beam of light and I begin to move my finger to a different place and obstruct a different part of the beam. We cannot see your feet and we cannot see your head on the screen anymore and that is exactly what we are doing. There is an endless beam shooting from all the chakras of the spine structuring the body at all times but we obstruct the flow of energy within ourselves by the wrong thoughts, the wrong feelings and the wrong actions.

Only a yogi who knows not by imagination or intellectual high voltage can withdraw his consciousness as well as life force from the body by quieting the heart and move his consciousness through the chakras to the spiritual eye. And only those who are developed enough to say that all matter are (thoughts) consciousness and energy. All matter seems solid and different from thoughts.

The masters say that he who occupies his time with Guru given techniques of meditation will without difficulty reach the pinnacle of spiritual freedom. Then we realize that God’s flaming presence is alive in all space. If you don’t meditate you have a huge, interesting, marvelous and philosophical knowledge stuffed with high metaphysics. It just won’t do you any good; it’s like having a nice book about food and the best menu in the world and you starve to death. We have to stop entertaining this ego consciousness through our entire life.

When we leave the body we realize we were not this body nor this mind and that we have been taking care of someone else. All our life we took care of a body and a mind which was not us but something grafted upon us. This ego consciousness is a graft. We have been hypnotized to believe we are the ego. Never were you in the body nor are you now and never will you be. But you have been hypnotized in experiencing the five senses that you have a body. Now you are dreaming you are alive and you will dream you are dead.

Is Life A Nightmare With A Few Occasional Good Dreams? Yes

This earth was not designed by God to be a haven of peace and joy but a temporary home of dreams with nightmares and yes a few occasional good dreams from which we all would finally awaken and go back to our real home of many mansions. In realizing their oneness with their creator individuals can become inwardly free from the apparent troubles and ills of this dream life. They behold loss and gain, sickness and health, life and death, merely as fascinating chapters of the dream creation.

How foolish it would be to presume such aboveness until the person in actuality knows for certain without a doubt that all matter is energy and that energy is nothing else but the thought of God. However, if that person hits his dream fist against a dream wall it will get him a dream fracture. Man’s cross to bear is his body and he must do it bravely by mentally rising above its difficulties. Those who seek happiness have to literally squeeze it out of this world. Our creator is dreaming through us and our own dreams and nightmares are included with His dreams making everything seemingly real.

Delusive dreams vanish in meditation. Don’t you know it’s your own dreams that frighten you the most? Constantly remind yourself, “It’s just a dream.” There are primarily only three dreams made strongest by God in man: the enjoyment of money, sex and wine. Give as little importance to them as possible living moderately to be free. The more importance you give to any of these three strengthens the demons in them.

With No Safety In This World What Should We Do?

Earth is an awful place and there is no safety here. What should we do? Don’t take this life to seriously, overcome delusion by holding on to this one thought. Our whole existence is nothing more than God’s motion picture and we are the actors. Act out your part well but do not identify with your role in the movie. All the awful things that can happen in this world can be duplicated in a nightmare.

We have all experienced these nightmares. You feel yourself being hit or run over by a car and your pain seems as real as if you were crushed by the wheels of that oncoming car and when you wake up to find out it was only a nightmare you laugh and say, “Thank God that was only a dream.” Life is just a dream within a dream and when you die and leave your body you will be dreaming you are dead and the suffering some go through at death will have seemed like a nightmare. So let’s not be afraid of anything. If you intellectually know that life is really just a dream, but you still have not completely realized it, that’s a sad state of delusion to be trapped in.

Only by realization of the self acquired by years of meditation and especially the practice of a technique called Kriya Yoga and by following a Guru given advice one can realize and say that all matter is condensed thoughts of God and that God is dreaming through us. We cannot get rid of the thought that is being suggested to us because it is to powerful. One day you will realize that this life is just a dream. Never were you in the body nor are you now and never will you be. But you have been hypnotized in experiencing the five senses that you have a body. Now you are dreaming you are alive and you will dream you are dead.

The continuous sight of yourself makes your mind think that it is constrained in the body, through meditation the mind will convince itself through this experience that it is not bound by the flesh, but is in all things. When meditating on the infinite your mind will become unlimited instead of finite. The typical man does not extend his consciousness further than the walls of his own bodily dwelling. When we become more advanced spiritually we comprehend that not just the world but the whole cosmos is our home. Why attach yourself to the passing dreams of this life. If you hold on to this truth you will eventually become free. From the teachings of PY.