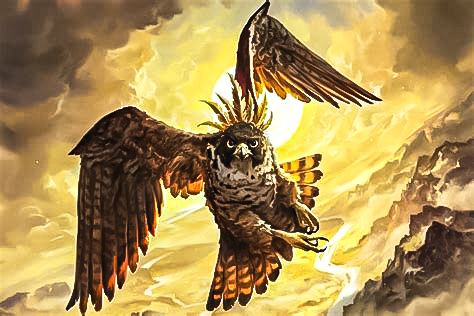 What Is The Falcon of Death?

As the falcon of death swoops down onto the bird (man) to release him from his bodily cage the bird screeches in sheer terror mentally as he is paralyzed by the grip of impending death. Wait, is this how it is supposed to be when the bird feeling at ease in never-ending space. Unfortunately when a bird is long confined in a cage even if set free may still want to return, likewise when a man is so attached to his bodily cage desires to return even so after being set free by death. Caged and imprisoned for so long the bird has forgotten the freedom it had in the skies. It is the same with the soul imprisoned in man’s body through many lives; it loses its memory of home in the vastness of space.

Did you know that most people fear dying because they were told that it will be painful? Why is man so stricken with horror and grief when he senses himself nearing or seeing death? When death arrives like a cruel tyrant it is very difficult for an individual to maintain a mental equilibrium when he feels his peace and harmony will be destroyed. It is not so hard for someone to give up an old overcoat when he has the chance of getting a new one, but because of deep attachments to their possessions, some people find it impossible to throw away even old used garments. Likewise, mundane people grieve when they are being ousted from their dearly loved bodies. Do you want to live with apprehensions? As long as you are alive you are not dead and when you die there is nothing to worry as it will be all over! At least for a while that is.

Spiritual masters tell us that when we die it is totally devoid of pain. When you go to sleep at night you do not feel any pain and when the last sleep finally comes there is no pain. As sleep expels the aches and pains of the hard worked day, death voluntarily releases us of all bodily pain and suffering. Death does not come as a punishment, but is the cessation of all of life’s sorrows as an essential finish to our bodily confinement and that our souls may depart this earthly realm and journey in a freer form to higher regions. The body may be buried or reduced to ashes in cremation but, the spirit will no longer be subjected to the torments of the body. Oh… what a relief for the soul is now free in a body of light in the beauty and peace of the astral spheres with no more bills to pay or worries about getting injured or sick.

There is definitely mental pain or terror for those who fear losing their physical body and who clutch to it in utter panic when life is ebbing away from the bodily frame and they resist unsuccessfully to keep on breathing. The majority of time even though man breathes constantly he is not conscious he is breathing as it is with the wise spiritual man throughout the death experience. When the lungs become paralyzed the spiritual man will not feel any suffocation because he realizes that the soul is not conditioned by breath. It is the opposite for the spiritually ignorant who thinks his life or soul depends upon his breath therefore it is he who will suffer the mental pain of suffocation. However even the advanced spiritual man dreads losing the mortal body and he temporarily forgets he is the immortal soul.

What are the metaphysics of life and death? Death transitions our soul from the physical body to an astral one and then the astral body transfers to the beautiful luminous astral world. Why death is considered a counterfeit sleep? It is because now you are dreaming you are alive and when you die, you will be dreaming that you are dead. Men of Self-realization know that mortal consciousness is a physiological mental experience. God is dreaming through us and our own nightmares are added into God’s dreams making everything hypnotically real. For example, when you go to the movie theater and look at the beam of light, is there anything real in that beam? Yet when you look at the screen you become involved in the emotion and you begin to cry or laugh but there is nothing in that light, right? When you see the hero die in a motion picture, he has not really been killed. It is the same with man acting out a role in the cosmic movie of life. The killer and the slain hero on the screen are just the electric shadows of two forms. The falcon of death and the villain on the movie screen are alike, they kill no one! Do not misinterpret this philosophy with false reasoning thinking we should kill all our enemies. The souls of your enemies are also immortal.

Furthermore, it is the same thing with creation. You and I are floating and it is God’s ideas floating in a beam of light. It is incredible how we feel we are so real. When the dreamer finally wakes up he realizes that all of his experiences were a mixture of various ideas in the dreamers mind. All motions of consciousness are on the screen of the mind and all of our mystifying and sweetened material entanglements keep us dreaming to make us forget our immortal consciousness. It does not matter how devastating our dreams are, the dreamer is never hurt by the circumstances of his dreams; he always finds himself safe after the dream experience. The human-dreamer may be scared to death with the experiences of his dream-life but as he is awakened in spirit he finds himself to be safe and sound.

Worldly men have no idea of what the soul is or how it comes and goes into the physical body. Those who fear the cycles of life and death and what these experiences will hold, will have to hear this over and over until they get the point. Unless man overcomes these fears repeat incarnation is in order until knowledge is gained on how to overcome them. Do not ever seek death; only a coward is afraid of learning life’s lessons. If spiritual development is not deeply implanted, the severe pain of illness or the nearness of death sparks great fear. Those who in despair have surrendered their faith in God and the memory of their immortal nature and die in terror, take with them into their next incarnation a depressing pattern of weakness and fear. The astral blueprint they have created will attract similar calamities to them. However, the hero even though he loses the death battle but departs with dignity, finds his way back to his oneness with Omnipresent spirit and at death drowsiness will overtake him into a state of peaceful slumber; when he awakens from his much needed sleep of death from all the hard trials of life, he finds himself aware of a new astral body and enjoys all of the beauties of the astral world encased in tissues of light forgetting the troubles of past earthly life.

Always remember that the totality of a human life is man’s preparation for his final examination at the time of death and when one finds himself at death’s gate, he will be reviewing in a blaze all habits and desires of his whole life. So quickly he will be overwhelmed by one desire or feeling that will be in accordance with his life’s character. He might have feelings predominantly happy for doing good deeds or guilty for doing evil actions or a feeling of being predominantly worldly for all his material actions. The dominating feeling will determine where and which particular regions of the astral world he will be directed to and similarly after that, to another appropriate incarnation back on earth. At the last moment of a man’s life his thoughts will determine what his status is in the hereafter. . Death is freedom and the greatest happiness from all the agonies and suffering of the flesh. For exact details of the astral world, read chapter 43 in the book titled “Autobiography of a Yogi” by Paramahansa Yogananda, a spiritual classic.,

« Why Did Yogananda Scold God? The New Updated Clips To See Now »