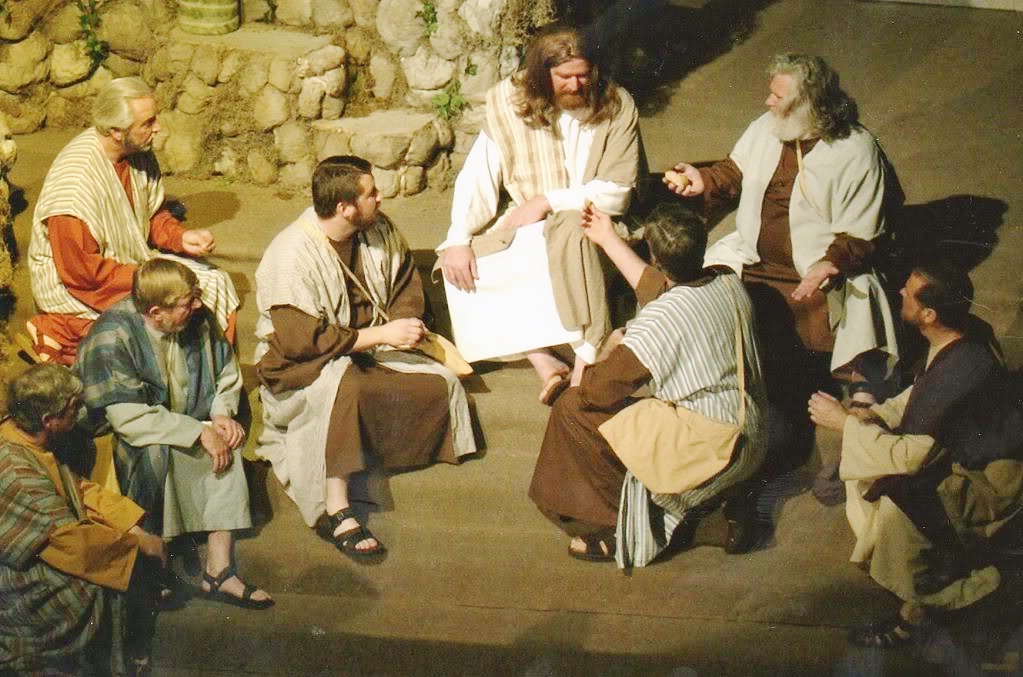 Why Jesus Spoke In Parables and Why It Takes A Master To Correctly Translate The Passages From The Scriptures?

Also How To Clear Up Misunderstandings of Direct Bible Quotes From So-Called Experts and Writers.  Why do you think Jesus spoke in parables?  His disciples asked him why and he said, “You are advanced in spiritual thought and receptive and the enlarged cup of your comprehension can grasp the oceanic expositions of truth from my own realizations. But the ordinary people ill-equipped in their reception are unable to practice or comprehend the truth of deeper wisdom. They glean from the parables the simpler truths according to their understanding.”

Those souls who are lacking mental, physical and spiritual development and who are totally identified with their physical bodies cannot comprehend the revelations about the states of heaven, for lack of understanding those people scorn that sacred knowledge of wholly discovered truth. Jesus spoke in parables to protect the essence of truth with the covering of esoteric illustrations and mystic terms.

What are the methods of comprehending the truth? The spiritual master tells us there are only two. One is by intuition and the other is intelligence. The second method of using intelligence is called the intellectual method and it relies on one’s intelligence and sense perception but this can mislead us, or limit the use of our intellect. In basing truthful ideas on this type of evidence the deduction can be incorrect.

There is a deeper explanation of the above. The essence or thoughts to remember is “beware” in the study of spiritual books. Be wary against the self-reliance of your intellect. Philosophers and authorities from the west have always understood that truth can be recognized by reason and logic. Truth seekers should meticulously examine different beliefs but random reading of spiritual and religious books written by unproven enthusiasts or untried novices produces a hash of diluted realizations, indigestible thoughts and outpourings of emotion.

When one studies the Scriptures the true way is not the intellectual way. There are many vague and meaningless books written on Revelation. Jesus was only crucified once but the teaching of Jesus Christ are now being crucified daily by misinterpretations.

What way is the best way to test the facts and find the truth in the scriptures? Let’s say you have in front of you the Christian Bible, the Islamic Bible and the Hindu Bible. Are you sure they all contain the truth? A great deal of the scriptures is not true but is the creation of continual mistranslations completed by men lacking in spiritual awareness. Just because numerous people accept as true a particular statement is not proof that it is true. There are times when one man knows more than the rest; when Columbus stated correctly that the earth was not flat but round nobody believed what he was saying. Most of the people are similar to a flock of sheep. When one jumps off a cliff, the entire herd follows him and jumps.

The question is “how are we able to grasp the truth?” not “what is the truth? For example, the way to discover the truth hidden in the scriptures is to apply the laws and live the teaching in your life. There are spiritual hypocrites who have read the Christian Bible over and over from cover to cover and proclaim they know all about it.

You can go online or for only a few dollars you can purchase a book of world scriptures or book on yoga and with little effort can be swallowed intellectually. However consuming ideas assorted from these world books or scriptures without assimilating them only creates a desire for more ideas and books, causing spiritual non absorption.

This is why in old India the Bhagavad-Gita (Hindu Bible) and the Vedas were deliberately unprinted for hundreds of years to forestall this sort of defilement of truth and it is the reason why the sages handed down from memory the real truths of their scriptures to the most devoted disciples. Just a few were given the truth. The rest received only as much as they could absorb at one time. There is a book that reveals many of these hidden truths titled “The Second Coming of Christ” Not the second coming of Jesus but the resurrection of the Christ within you. It is a masterwork translated by a real master, Paramahansa Yogananda, who takes the reader on a deeply inspiring journey verse by verse through the four Gospels obscured through centuries of misinterpretation. This is where you will find your hidden truths. It is finally available in paperback. http://bookstore.yogananda-srf.org/The-Second-Coming-of-Christ-p357.html

There are so many writers quoting passages from the scriptures verbatim with continual mistranslations with warnings completed by men lacking in spiritual awareness. Most theologians and writers take references literally. However the spiritual and scientific importance of these passages stays concealed from the majority of people for they are unable to interpret or perceive the truth.

Because our senses of perception are limited tools it is impossible to perceive the truth intellectually except in an incomplete way because of the limitations of man’s intelligence. For example, you see some smoke on a faraway mountain and deduce that something is on fire. But getting closer to that mountain we notice the smoke we saw was nothing but a dust cloud.  The look of truth may be known by the intellect, but the essence or real truth is only known by intuition. We must realize and feel truth to know what is true and the power that will test the truth is intuition which is developed only by meditation and it is never wrong.

For example, a few references, just to substantiate what I have said. First, from Matthew the 4th Chapter, the 4th Verse, which is a very wonderful reference, and which substantiates what I said: “…Man shall not live by bread alone, but by every word that proceedeth out of the mouth of God.” Do you really know what that means? Man thinks he lives on bread, air and sunshine, but it means the food, oxygen and the different elements which we eat are nothing but condensed cosmic energy. “But by every word that proceedeth out of the mouth of God.5” “Every word” the Word means energy the vibration of the Great Cosmic Sound of Om the Holy Vibration, the Supreme Vibration. This refers to the vibration, or the part of that Holy Vibration, (unit of unlimited Cosmic Energy) which comes in through the Medulla Center and sustains you. Unless it was for that, even though you say your digestion takes care of the food, but it’s the Energy in the digestive processes that takes care of everything.

So, there we have one reference about the fact that the Cosmic Energy of God descends through the Medulla Center like a beam and sustains us. But due to bad habits, over many incarnations we’re used to nice food, and some oxygen. But we can, by meditation, show that we do not need the oxygen even. The breath quiets down, through the practice of yoga, and you won’t die. You’ll become healthier, because the internal organs rest. Cosmic energy is constantly fed with positive electromagnetic energy from outer space and it enters into the medulla oblongata through the lower back of the head where we have a positive and a negative antenna in both sides and when it enters the medulla it forms a number of magnetically attracting centers of energy, chakras and consciousness. Each human being carries a bundle of these magnets which draw energy according to their strength.

Our bodies are no different than a car battery that generates current when it’s charged by its generator but the current is only temporary unless it’s constantly recharged. Likewise our body must be sustained but not only by food, air and sunshine but by vibrating life-given energy (Word) of God. This is the direct source of life. If you withdraw that from man he will drop dead. You can pump air into his lungs and stuff food into his stomach, radiate his body with sunshine but he will still remain dead. All material substances that support the body are only indirect sources of vitality.

The Secret Reason Prophets and Saints Are Hidden From Humanity

There are those who wrongly think Jesus is coming back again on earth and call it “The Second Coming.” We are told that God has forbidden the prophets and the great ones to remain on earth in plain view freely available and known to the public. Their special dispensation given by God must not be flaunted before the public gaze. This is the reason they are not accessible to humanity with the exception of the bestowal of their silent blessings.

The true avatar Mahavatar Babaji is always-hiding though ever living. It is the same with Jesus. Liberated souls are every living whether with or without a body in spirit. They may appear openly anywhere, anytime they desire, but are not permitted to stay plainly visible to mankind. If allowed to do so it would produce a force that would disturb the celestial order established on mankind’s free will.

People would forget the spirit and idolize the extraordinary personality. People would make an effort to limit God to a human form and would unwarily overlook His formless omnipresent self. In addition, the common people would flock to that astonishing avatar or prophet, and those disbelievers of the divinity of that specific individual would be unfortunately left behind. That is not what God wants.

Just as the prophet or saint fulfills his role or divine mission, he is immediately pulled away by God to work behind the scenes of this cosmic drama. There are those who have heard the illustrious saints in India say, “God is pulling me away, I have given too much.”

Christians by the millions worship the image of Jesus and his cross as his symbol. Those Christians who simply adore his personality do not comprehend him as a world savior.

That is why many who consider themselves true Christians have not been accepted by Christ. Those who continuously commune with the Infinite Consciousness and realize Christ as a savior are the accepted ones. To behold Christ as being confined to a tiny bodily frame is a misunderstanding. But perceiving him as the formless Christ is Christ-ianity at its greatest. See the book Autobiography of a Yogi, chapter 33.

The majority of people who have not yet read the spiritual classic “Autobiography of a Yogi” have absolutely no clue of what a real avatar really is. People may have some vague impressions but have no real information of what a perfected being (siddha) actually is. The spiritual state of a true avatar is way beyond human comprehension. It is inconceivable that from the diminutive vision of men to even to try to picture their attainment. These deathless beings have full power over death and are supremely free unsubjected to the universal economy and any obligations to nature. These divinely appointed beings give supernal blessings to the world and know the truth behind the veil of relativities of life and death.

Great avatars or prophets like Krishna or Christ appeared on this earth for a spectacular and specific reason and who departed as soon as their purpose was accomplished. However the great guru Mahavatar Babaji (Mahavatar is classified as great avatar) has no historical reference and has never openly appeared in any time period. The misunderstood beam of publicity was never in his millennial course of actions. His work was more concerned with the progress of man than any one spectacular occurrence in time. That’s why there are a number of these towering spiritual giants that remain worldly unknown. Some of the known ancient Indian avatars are Buddha, Krishna, Rama and Patanjali. It was promised by guru Lahiri Mahasaya that when the name of Mahavatar Babaji is uttered with reverence, that devotee attracts an instant spiritual blessing.