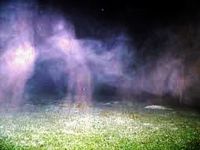 How To Avoid Real Possession

They are astral beings who are earthbound because of their attachments and strong material urges desirous to return to a physical form and roam around in the ether to satisfy their need for sense pleasures. The spiritual master says there are some tramp souls who take possession of someone’s mind and body but only of people who frequently keep their mind in a blank state with no thoughts for long periods of time.

These people have weakened their minds and became vulnerable and mentally unstable due to karmic attraction and mental emptiness and they unconsciously invite the vagrant tramp spirits inside their bodies. If one unwittingly leaves his car unlocked with the keys in it, any crude, uncouth individual could get in and drive away. Tramp souls who have lost their own physical forms are on the look-out for those neglected transports.

There are some tramp souls who on earth were criminals, robbers, murderers, drunkards and particularly treacherous, vicious and licentious beings. And those individuals who have left their bodies in a state of sin as with those who foolishly and ruthlessly committed suicide are thought of as tainted souls in the astral spheres. Imprisoned in their astral bodies they grieve the loss of their earthly life and find no rest and therefore must roam in the lower astral planes grieving the loss of their physical embodiment or hating to be reborn. These pitiful souls have to wander around in the ether until they have worn out the karmic effects of their bad actions. There are evil-possessed people who made nothing but trouble in this world and as evil-obsessed spirits they continue their mischief-making in the astral plane and in the physical plane as astral tramp souls. These tramp souls hunt for people with karmic similarities and are attracted to them by their negative thoughts.

When an evil person sheds his mortal frame and goes through the door of death into the hereafter, he continues to be evil and does not become an angel. Only one who has been angelic on earth when crossing over the abyss of death can enter the superior environment of Heaven. As birds live in the air, worms live in the earth and fish live in the water, angels reside in the finer vibratory atmospheres in various regions of the astral universe according to their merits from their pre-astral life on earth. Likewise fish cannot continue to live out of their watery environment, unclean spirits or tamp souls have to stay on the grossest astral planets. Finer spirits live in the higher luminous planets; if tramp souls were to dare to move towards those higher regions, they would be instantly ‘astral-ocuted’ or shocked by higher voltage of astral power.

Some people cry out when having a bad dream. In the same way, during the death sleep, unclean spirits and tramp souls wander about in the ether howling for relief frequently trying to seize some submissive bodily transport in which to communicate their pent-up wickedness and agony. People with strong will power, spiritual vibrations and brains occupied with intelligent thinking should never worry as their minds can never be infested. Devilish souls can never enter minds of spiritually advanced people. The master warns us that is the reason one should never let the mind go blank or be negative and to never let oneself be fooled or open to messages from so called mediums or Ouija boards coming from disincarnate souls as this could represent itself as an ideal opportunity for possession from the lowest type of tramp spirits seeking out expression and experience in human transports. The thought of evil spirits or devils occupying weak-brained, unthinking people should not be considered or discarded as superstition; a powerful personality shuts out the invasion with a fully occupied mind.

Similarly those who practice the scientific methods of yoga meditation and prayer should never fear such beings for if ones thoughts are on God no harm can come from evil spirits. Remember when one is in meditation with God one can be thoroughly convinced that the body will be so fully charged with cosmic energy emanating from the high-voltage thoughts of God and that one will be protected from the inferior-astral trespassers. There is a clear-cut distinction between the state of a person acting under the power of being possessed by an unclean devil or tramp soul and that of someone acting under a subconscious obsession, idea or autosuggestion.

When you encounter the real thing, actual possession consists of the presence in someone’s body of a spirit that has thrown off its own physical form and in its astral body completely or partially incapacitates the coherent faculties or common sense of the one being possessed. Only in the condition of a mother carrying a child can a human body accommodate an additional being besides its self. However, expert metaphysicians are capable of differentiating real cases of spirit possession with metaphysical powers and able to detect the invisible astral form of the visitor next to the astral body of the one being possessed.

For the layman, it is a different story. The only way to conclude a genuine case of spirit possession is by evaluating the many states of spasms and outrageous behavior of which a person possessed is subject. The true signs of a person possessed by an evil spirit are lack of natural behavior, bloodshot eyes, uncommon physical strength and uncanny expressions. In true cases of spirit possession, bestial irrationality has been described and displayed in some exorcisms. With the attraction of his own sinful vibrations, like attracts like, a man can draw unto himself an evil spirit. A wicked, unclean spirit can keep the mind of a possessed person in a state of neutrality, sub-hypnosis and suspension so that the mechanism of consciousness, senses, body and brain of the victim could be controlled without intervention. The possessed man may or may not be conscious within his evil controlled body as a person who is semi-conscious under the state of hypnosis may display the state of sleep. If possession from disembodied souls or unclean devils persists for too long, great harm is done to the sense organs and mind of the possessed person causing a real threat of long-term insanity.

To dislodge and remove an unclean spirit from someone’s brain it calls for powerful divine willpower and concentration. If the healer has dynamic spiritual power, he can throw the entity out by using silent will power and continuously staring into the eyes of the distressed person inwardly commanding the unclean trespasser to go.

If the will of the healer is stronger than the evil spirits, the evil entity will depart. Repeating the sound of ‘Aum’ and by whispering it in the right ear of the stricken person, the unclean spirit is certain to go away. These tramp souls being from the dark lower astral regions cannot tolerate the spiritual thoughts and higher vibrations from the utterance of holy words, particularly Aum, Aum repeatedly whispered in the right ear. This typically brings forth a rapid, terrified reply from the spirit “don’t say that holy word; I will leave,” and this identifies spirit possession.

However, there are some devil spirits who are unwilling to leave and will not obey the command to get out and will fight against the holy vibration. The master tells of a case of where the powerful vibration of Aum was used to shake and dislodge an intruding spirit but this only created convulsions in the bedeviled man when finally the unclean entity violently came out of the man’s body leaving him shaken and limp but not harmed due to the divine intervention. Those people who witnessed the removal of the evil spirit were in wonder of the supreme authority by which the demonic spirit was forced to obey.

Healthy normal minded people should not be concerned about the annoyance of evil spirits, ghostly tramp souls or demonic possession as they are impervious to their wickedness. The spiritual master Paramahansa Yogananda talks of a far greater danger to one’s welfare which exists around and within every person. Good and evil are battling over divine supremacy. There is one force trying to harm us and another trying to save us. We are all caught in-between this cataclysmic battle between Satan and God. It is wise not to reject this complex war rationalizing Satan is nothing more than a delusion. Always remember environment is stronger than willpower. Be careful with whom you associate with at all times. Exact information on the astral world is explained in the book “Autobiography of a Yogi” by Paramanhansa Yogananda, a spiritual classic.

« Saturday, March 27, 1937 Encinitas Hermitage The Master Says… Has The Karmic Seeds In Your Subconscious Mind Predestined You To Failure »